Four years ago when I decided to return to creative writing, I had no idea that blogging about writing was even a thing, that there was this whole amazing online community I could join. One of the very first author blogs I discovered was Kiersten White’s helpful, heartfelt, and hilarious creation, which broadened my blog horizons and is still one of my favorites to read. I love her voice in her posts, in her books (Evie’s humor is irresistible, and I just read newly released Mind Games and ohmygoshsogood!) and, I can now say, in person! 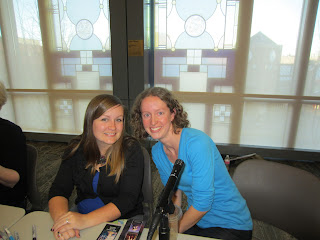 This past weekend she came to Eugene as part of HarperTeen's Dark Days Tour, which was a great time all around. Kiersten was charming and freaking hilarious, as expected, and really so was everyone else on the panel: Lauren Oliver, Dan Wells, Debra Driza, and Claudia Gray. Such a sharp, entertaining group! I especially enjoyed Dan Wells’ insights on covers (“They're less a part of the book itself and more like mating plumage”) and on having flexibility when you’re drafting from an outline (“No plan survives contact with the enemy”). There were also some good takeaways for writers that came up multiple times from different people on the panel:

~ Keep challenging yourself in new ways for each book project; even within a series, try a POV or chronology shift or SOMETHING. It makes your writing better, keeps you engaged, and makes you less likely to want to kill off all your characters. Also it leads to Kiersten announcing “Kiersten White is a masochist who hates her readers and herself!”

~ Each author has a different process… and so does each book. I’d already read a great post by Victoria Schwab on this subject, but it was interesting how many authors on the panel had found the same thing to be true – each of their books, even within the same series, involved vastly different timelines, habits, difficulties, and solutions. Except maybe for Lauren Oliver, who is crazy disciplined and sticks to predetermined word counts that depend on how many projects she has at the time. It really does come down to doing whatever works for you, now.

Afterwards, Kiersten wielded her collection of cover-color-coordinated sharpies to sign all of my books and even a card I’d printed for my writing quotes board. 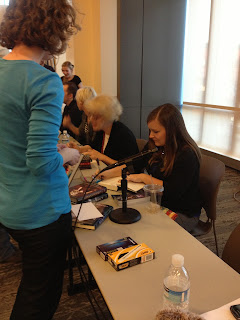 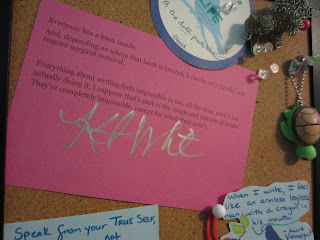 The signing photos are thanks to my *new writer friend* Emily. Yay! Though actually our friendship isn’t that new, just the realization that we both half-secretly write YA fantasy and should really get around to talking about it and becoming critique partners already. We both left really inspired to whip our current WIP into shape, even if it required taking another piece of the panel’s advice: looking like a complete crazy person at the local coffee shop, muttering lines and acting out character gestures to figure out a scene, possibly after not showering for a while.

Hmmm, that “complete crazy person” sounds a lot like “stereotype of many people in downtown Eugene,” so maybe this won’t be as hard as I thought…