'WriMo Week One: Wordcount vs. Worry


The first full week of NaNoWriMo ended yesterday, and I am… very, very behind, further behind than I ever have been before, like 8000 words behind and it's only Day 11. I can partly blame procrastination, self-doubt, and being in a confusing transition from pantser to planner. But I also have a much more interesting excuse:

We brought Karou home from a shelter in September, and she’s been a wonderful friend, companion, running partner, and source of entertainment ever since. I would never have called her a muse, however. She doesn’t warm my feet while I’m writing or inspire me to pen new stories about dogs. But the first weekend of NaNoWriMo I learned how hard it is to write without her happy and healthy around the house. 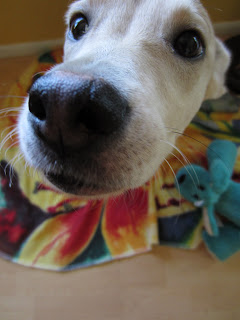 We’re still not sure what she ingested to cause the problem (and we will probably never know, which SUCKS) but on the first Friday of November, a neurotoxin invaded her brain and made her hallucinate and activate her flight or fight response constantly, so that she was skittish, twitching, and lunging at/from imaginary foes nonstop, regardless of what was in the way… it was terrifying and stomach-dropping and resulted in a panicked walk to the vet – where even sedatives didn’t stop her from pacing and skittering – an expensive overnight emergency stay, a scary mini-relapse at home two nights later… basically I spent November 2-5 stressed and depressed, either waiting for vet updates or escorting Karou everywhere and thinking everything in sight was a potential danger. I tried to channel it into my writing – my book is dark and does include some scenes of paranoia, worry, and helplessness – but I can’t say I made much progress. I don’t know how people with, say, seriously ill children or spouses manage to get themselves to a keyboard and churn out anything but despairing drivel. Catharsis doesn’t make for quality or even much quantity, at least in my case.
BUT now she is all better, back to her goofy, energetic self, THANK GOODNESS, which means my mental state is a million times better and I have NO MORE EXCUSES TO NOT WRITE! I should be writing RIGHT NOW, ALL THE TIME to catch up.

Seriously, why am I still talking to you guys? ;-)

Posted by Jillian Schmidt at 6:33 PM