Bradbury on the Brain

My literary lives seem to be converging on Ray Bradbury lately, which is a pretty awesome place to be.
(1) I’m still doing the Bradbury-inspired Write 1 Sub 1 challenge, aiming for two stories written and submitted per month. I met my February goals with a week to spare and I’m working on my March ones. Huzzah! Though I learned from #2 below that Bradbury kept up his story-a-week schedule for ten straight years, which seems positively superhuman.
(2) As part of my Off the Shelves Challenge, I recently read Bradbury’s Zen in the Art of Writing, a collection of essays on writing and life, many of which were originally introductions to his novels. I’d recommend just reading the whole thing, but here are a few of my many favorite quotes:

“Plot is no more than footprints left in the snow after your characters have run by on their way to incredible destinations.”

“Science fiction is an attempt to solve problems by pretending to look the other way.”

“I have never listened to anyone who criticized my taste in space travel, sideshows, or gorillas. When this occurs, I pack up my dinosaurs and leave the room.”

“There is no failure unless one stops.”

(3) Coincidentally, I started that book around the time I found out that the local Big Read book is Fahrenheit 451, and there are related events going on all month. A few days ago I went to hear his official biographer, Sam Weller, give a really entertaining talk about their relationship and Bradbury’s fascinating life. A few of my favorite biographical tidbits:
~ Bradbury has an incredible memory, and in fact claims to remember all the way back to his own birth. When he was still doing speaking tours he would often subject audiences to a detailed description of his circumcision to illustrate this.
~ Fahrenheit 451 has a great creation story. After deciding to expand on a short story, he wrote the novel version from scratch in the basement of the UCLA library on typewriters that charged a dime for each half hour. It took 9 days and $9.80, and in between frenzied typing sessions he wandered the stacks, surrounded by the beloved books his characters were fighting to preserve.
~ Before anyone knew about the dangers, there was a limited print run of F451 made out of asbestos (you know, because then they would be fireproof). Since they tend to (1) be potentially lethal and (2) fall apart rapidly, they are extremely rare now.
~ Bradbury is a big believer in naps. He’s a morning writer, and argues that taking an afternoon nap gives him two mornings per day to write.
~ After witnessing a horrific car accident as a child (see his story “The Crowd”), Bradbury decided he never wanted to get a driver’s license, and he never did. (Yay, commuting by bicycle!) When he visited NASA, however, they let him maneuver the Mars Rover via joystick… meaning the only motor vehicle Bradbury has ever driven is the Mars Rover. There’s also a crater on the moon named after his story collection Dandelion Wine.
And the part of the presentation that may have excited me most… Check out the story collection honoring Bradbury that Weller is bringing out this July 17th: 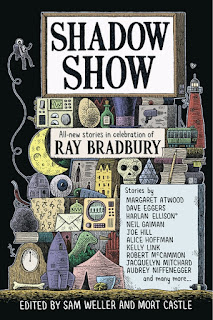