Rejection is for the Bird


I’ve been submitting short stories for a few months now (thanks, W1S1), which means I’ve been receiving rejections for a few months now. (If there are writers out there with 100% acceptance rates on their early attempts, please don’t say so in the comments. I wouldn’t want to have to dig out my torch and pitchfork or interrogate you about why you never saved that tortoise in the desert.) (Just kidding.) (Kind of.)
I’ve found a number of positive ways to deal with the rejections, however. I remind myself that I’m still very new at this game and I’m up against a lot of excellent competition. I try to have at least two stories out in submission land at any given time (emphasis on try), so that when one gets rejected I can still pin my hopes on the others. And I embrace the rejections as motivation, keeping the slips* as reminders that I’m putting myself out there, that each “Not for us” is a step towards acceptance.
And I took it a step further, drawing on something from the memoir section of Stephen King’s On Writing:
“When I got the rejection slip from AHMM, I pounded a nail into the wall above the Webcor, wrote “Happy Stamps” on the rejection slip, and poked it into the nail… I felt pretty good, actually. When you’re still too young to shave, optimism is a perfectly legitimate response to failure.
By the time I was fourteen (and shaving twice a week whether I needed to or not) the nail in my wall would no longer support the weight of the rejection slips impaled upon it. I replaced the nail with a spike and went on writing…”
I loved the idea of a rejection spike and decided to get a version of my own. My first thought was something epic like a narwhal sculpture with a long horn, but I eventually went with something smaller and cheaper that would still look nice in my office (and even fit with the blog's tree theme): 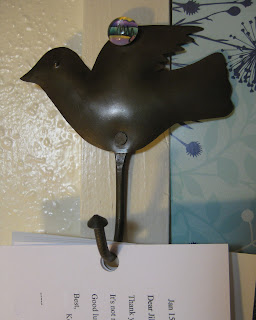 At least part of me looks forward to the day when the hook is completely filled and I have to upgrade. Hopefully by that point there will be a number of acceptances in the mix, but if not I plan to get a larger “spike” and keep on writing.
Does anyone else have a spike? How do you deal with rejections?
*Okay, technically I haven’t received rejection slips. I’ve gotten rejection emails and then printed them out. Same difference.
Posted by Jillian Schmidt at 10:26 PM