Apparently it’s February in less than an hour (wait, what?), meaning January 2012 has come and gone with mindbending speed and it’s time to check in on my goals for the month.
Writing Goals:
I actually exceeded my Write1Sub1 monthly goals with one drafted and two polished stories, two submissions, and one re-submission, making me a January Juggernaut: 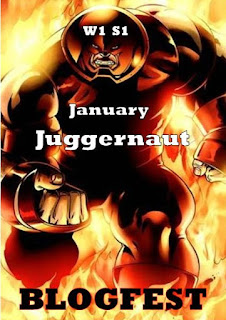 Woohoo! I'm still unpublished, but it feels great to be experimenting and producing so much.
I was also supposed to complete a full, detailed outline for my rewrite-the-mess-from-scratch WIP. Instead I made it about a quarter of the way through the outline and then got distracted/agitated and started writing instead. So now I have 6,000 words (yay!)… and the sneaking suspicion that I’ll have to get rid of most of them when I more clearly develop the direction of the rest of the novel (Arrg). I’m excited to be writing, but I really need to figure out where I can trade in my Pantser pants for some Plotter skills so I don’t get stuck in an endless rewrite loop.
Reading Goals:
To keep pace on my 75-book Off the Shelf Challenge, I have to read 6-7 books per month. It's coming down to the wire, but I'm about to finish my sixth. I also sold some old audiobooks to a local store at a great rate, though my shelves are still embarrassingly overstuffed. But don't worry; I have a plan:
How was your January?
Posted by Jillian Schmidt at 11:27 PM