Now that I got my eager, greedy little hands on a copy for myself, I want to share an amazing little book (technically a pamphlet, but it looks much too nice to be called a pamphlet) that you should buy for yourself, or as a gift, or both.
Back in the beginning of November, Jen Campbell (of the hilarious blog series and now book Strange Things Customers Say in Bookshops) took on a fantastic, frenzied challenge for a great cause. She wrote 100 poems in a weekend to benefit research centers focused on EEC, a condition which she has. She explains EEC here and is amazingly adorable as she starts the challenge with sparkling tights and her tortoise here.
And here’s the thing: the poems are stunningly, astonishingly good. (I sound surprised not because I expected the poems to be bad – she is a talented published poet, after all – but because I know how hard it is to produce quality creativity on such a tight deadline. *waves at horribly messy NaNo draft.* These poems, from the first to the last, aren’t merely impressive "for someone working quickly on very little sleep"; they’re impressive, period. I seriously can’t wait to own this book.)
Part of the initial fundraising was the opportunity to donate money and receive a postcard with one of the poems handwritten on the back. I went for it and my postcard recently arrived: 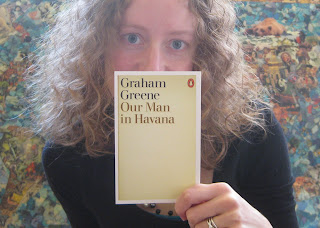 It made me incredibly happy, not just because it was a tangible reminder of the project and the human connection, but because the completely randomly selected poem was one that I would have requested if given the chance. (Not only do I love the sense of vastness and exuberance of the poem, I also happen to have an obsession with maps, as evidenced by the giant map-themed collaged tabletop I made that's leaning in the background.) 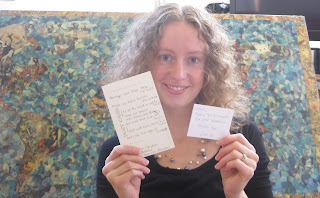 The maps were larger than our eyes.
Made our knees buckle. We wished
to see the world in wooden boats.
Carve our names into waves, and shout
the wind down from the clouds.
Talk with him, invite him home
and cook him eggs for breakfast.

(Told you she was good.)
And no I don’t know why I didn’t blog about the project back when it was happening. Gah! I should have, I meant to, but I failed to do it in time. But it’s okay, right? Because now you can still donate to a great cause AND you can get ALL the poems, signed, for about the same price as the card. Get moving though, because I suspect the 200  174  171 copies will be gone quickly.
Not that she needs me to plug the pamphlets, as the quality and charm should make them sell themselves, and Gods on earth people like Stephen Fry and Neil Gaiman discovered the project and tweeted about it when it began. (They have a few more followers than I do, I think, just a few.) But I couldn’t pass up this second opportunity to spread the word about something that excites my poetic brain and warms my heart so much.
Posted by Jillian Schmidt at 12:13 PM