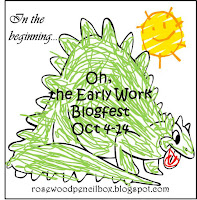 I found out about this super-fun-with-super-prizes blogfest a little late in the game, but fortunately Julie at the Rosewood Pencil Box has extended the deadline until October 28th. So dig out those old school projects and glittery unicorn journals and join me in blogging about your earliest writing.
It’s taken me a long time to seriously commit to it, but my writing started ridiculously early. After I could form letters but before I knew how to spell more than a handful of words, I was determined to start writing stories, so I would sit at the kitchen counter and ask my mom how to spell each and every word. Fortunately she was a writer herself, so she had the patience of a saint about it.
I still remember the concepts of my first two books: An ant baseball game (very predictable, since I was raised to be baseball-crazy from a very young age) and a boy who loses his piano and finds it floating down the river (no idea where I came up with that one, or why I believed a piano would be buoyant). I included illustrations, of course. Sadly my creations are either long gone or buried in a box in the attic, but I tried to reproduce some of them for you: 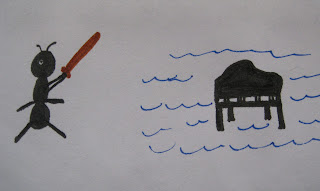 That was surprisingly difficult. Hopefully my writing has improved more than my artistic abilities…
Technical difficulties just ate my attempts to add a dinosaur drawing (in the spirit of the blogfest). But these guys would love to drink a toast to your early works, if you'd like to share. :-D 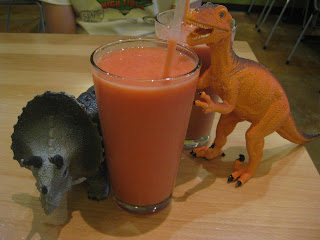 Posted by Jillian Schmidt at 6:52 PM