Their Time to Shine

Road Trip Wednesday is a ‘Blog Carnival,’ where YA Highway's contributors post a weekly writing- or reading-related question that begs to be answered. In the comments, you can hop from destination to destination and get everybody's unique take on the topic.

This week's question: What supporting character from a YA book would you most like to see star in their own novel?
(In addition to Ron and various other characters from the Harry Potter series, of course; I think we can all agree on them.)
Because their authors are awesome, two of my top choices have actually already been written.
When I read Ender’s Game, I felt like it was the perfect novel. It was just as amazing when I reread it and when I gave it to a student who hated reading and he loved it too. But I wanted to read more about Ender's siblings, his school companions, his universe… and Orson Scott Card went above and beyond:
When I read the companion series from the perspective of Bean, I loved it just as much as the Ender series, maybe even more, which I didn’t think was possible. Card's ability to develop characters and their back stories is phenomenal, and I'm excited that there is still more of the Enderverse for me to read.
More recently I read The Forest of Hands and Teeth series, and I found myself wondering about the adults who established the village in the first place. Carrie Ryan apparently agreed, because I just found out she wrote "Hare Moon," a short story about Sister Tabitha as a teenager.
There are a few side characters that I think still need to have their full stories told, however: the members of the VFD organization in The Series of Unfortunate Events. I loved reading that series until the end, when I realized that "Lemony Snicket" was never going to answer most of the mysteries, not even in the companion books that promised to do so. Not that I’m bitter or anything.
Speaking of reading, I still have a lot to read before the end of the year in order to complete the Off the Shelves challenge: 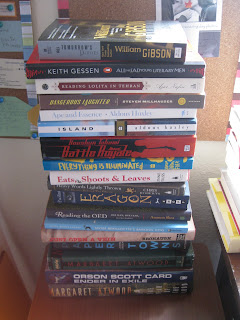 While I read like a fiend through that pile.... Are there any sidekicks or supporting characters from YA novels that you'd like to see star in their own book?
Posted by Jillian Schmidt at 12:25 PM