My husband doesn’t like to celebrate his birthday. It’s not because he hates being a year older (even though we do call him an old man whenever he wants to go to bed early); he just doesn’t like the pomp and attention. But this year I insisted, because his birthday coincided with his completion of a rather epic accomplishment.
For a full year, starting last October 1st, my husband rode his bicycle every single day (for at least half an hour, but usually much longer) AND gave up donuts, candy, ice cream, and cookies. I told him that giving up that many foods all at once was crazy, but he proved me wrong and did amazingly well. And the few times he ate a forbidden food -- usually because it was forced on him at school -- he had to do a ride that was double his average mileage. He never missed a day on the bike, not even when he was really sick, or exhausted, or on a tiny borrowed bicycle, or in the middle of one of many stressful trips. It took an incredible measure of dedication, planning, and effort.
So this weekend, we celebrated.
We gathered with three new friends and two college ones who had traveled in for the weekend, and to break my husband’s donutcandyicecreamcookie-fast, we indulged in a sugar fest. First we bought a random selection box from the famous Voodoo Donut and had at least two each; I can now highly recommend any of their peanut butter and chocolate varieties and, more surprisingly, the Miami Vice:

Later in the day, we all biked into the next town over to try Sweety’s, a cheery establishment which sells frozen yogurt as a vehicle for dozens and dozens of self-serve toppings (as many as you want in one dish, since they only charge by weight). 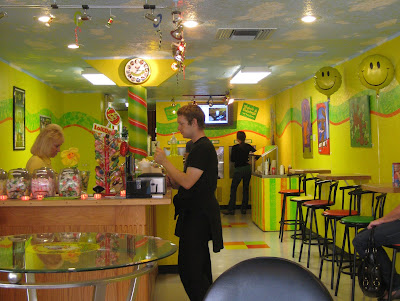 I think I’m still recovering from the blindingly bright colors and the sugar rush, but it was totally worth it. There was also some Rummikub and Bananagrams and Settlers of Catan involved afterwards, since I am a certified card and board game addict and my friends are kind enough to oblige.
But this post isn’t about eating donuts or trading sheep. (Okay, maybe it is a little.) It’s another celebration of what my husband accomplished, and an invitation, for myself especially, to follow his lead. Yeah, it can be difficult to fit writing into every day, but it can’t be any harder than bicycling every day…even though there’s no such thing as cyclist’s block. It’s also a reminder to make grand goals and then go after them. My current plan is to finish and submit three short stories and finish a comprehensive novel outline before the end of this month.
…and, afterwards, to celebrate with excessive sugar.

What do you hope to accomplish this year or this month?
Posted by Jillian Schmidt at 1:26 PM