Not that I’m such an uber-prolific blogging machine that you were all worried, but I thought I’d explain that I’ve been radio silent since Thursday because we flew back east for several days to celebrate Kyle’s sister’s wedding. Of course I spent most of the time enjoying wedding festivities and hanging out with family and friends, but while those bonding times were wonderful for me, I doubt they would make an interesting post for you. Instead you get a list of random Things I Learned this weekend:


1. The Eugene airport is a dream. Everyone is calm and friendly and there is a Quiet Room (which sounds vaguely creepy, but is not) which has a fireplace and rocking chairs and free WIFI, so that when you show up early for your flight and then discover there are no lines because it is such a tiny airport, you have somewhere to nice to pass the extra time. And if you’re feeling especially fancy, the gift store across the way sells smoked salmon.
2. Red-eye flights are a nightmare. Not surprising, I know, but it was even worse than I’d remembered. It’s especially difficult to get any sleep with no foot room, bright flashes from the in-flight movie (we resorted to covering our eyes with the legs of Kyle’s zip-off pants, but still couldn’t fall asleep) and the adrenaline from having to sprint to the gate on both of our plane changes (note: next time schedule longer layovers).
3. Wedding dances are as awesome as school dances were awkward. I LOVE dancing now, and Kyle has gradually come around to liking it too. Spending an amazing night on the dance floor while watching his middle school aged cousins, who initially had to be dragged onto the dance floor and constantly reminded that no one from school was there to judge them, reminded me that while our dancing skills have hopefully improved since we were teenagers, the biggest reason Kyle and I enjoy ourselves is that our not-caring-about-what-other-people-think skills have improved even more. One reason I write YA is that I want to tell teenagers such things.
4. Regardless of what this photo may imply, I am not the next Robin Hood. 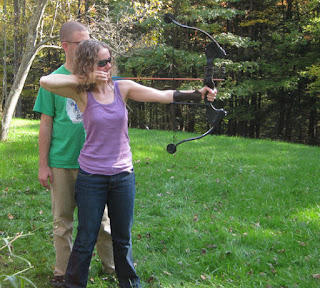 Kyle’s brother mentioned some old bows that he had in the attic, I mentioned that I’d always wanted to try shooting arrows, and the day after the wedding I found myself showing off a surprising predictable complete lack of strength and accuracy.
5. The anti-rumor rumors are true: kids still read, even boys. Kyle’s aforementioned cousins were traveling with an impressive stack of books; 4 for the girl and 7 for the boy. And the 11ish-year-old girl who sat next to me on one of the flights home was also engrossed in a book for most of the flight. Unfortunately I eventually put my own book down to watch some of the in-flight entertainment…
6. …so I also learned that (1) I still don’t understand what people see in The Big Bang Theory, and (2) even Hugo Weaving can’t save a poorly done superhero film.
7. Lev Grossman’s sequel to The Magicians is in stores. 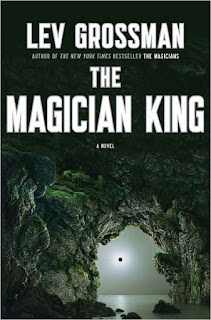 It was in the Eugene airport bookstore display window (further evidence of point #1) which was the first I’d seen or even heard of the book. WHY DID NO ONE TELL ME ABOUT THIS? I loved The Magicians in all its twisted meta glory, and it even inspired part of my WIP. Now I have to add The Magician King to my very long and very painful I-really-wish-I-was-letting-myself-buy-new-books-right-now list. And I thought waiting until Christmas to read The Daughter of Smoke and Bone was going to be impossible...
Have any new releases surprised or taunted you lately? And are we any closer to perfecting the teleportation technology that will make 9-hour red-eye flights obsolete? Exhausted inquiring minds want to know.
Posted by Jillian Schmidt at 10:27 PM