Are You Ready to 'Rimo?

It's almost Nanowrimo time! And I'm EXTRA excited this year, because now I'm living much closer to the write-in and meet-up locations, so I can go and meet other writers. In person. It's crazy, I know.
Here's what I need before it begins:
Fingerless gloves
I used to have a pair of cheap gloves that I cut the tips off of to survive winters as a grad student. I even took a picture for some reason. 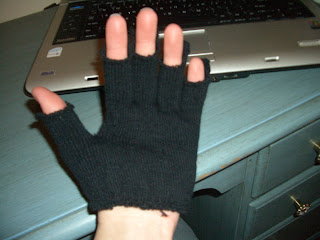 Unfortunately I lost them somewhere and all I have at the moment are giant knit gloves that are no good for typing. This must be remedied.
The real Scrivener, finally
After the last Nanowrimo, Scrivener announced that they’d give a discount on their Windows version, which was supposed to be released in “early 2011.” That apparently didn’t go as planned, but they recently gave October 31st as the release date, and hopefully the hoards of eager Nanowrimos will make them stick to it. I’ve enjoyed experimenting with the Beta versions of Scrivener, so I’m excited to finally buy the real thing.
A baked goods supply to go with my coffees and lattes
Unfortunately I’ve lost my taste for most over-processed, overly sweet store bought cookies, so I may have to actually bake my own. Oh, the humanity!
A real, honest-to-goodness plan and outline, not just a hazy concept
There was a time this year when I considered skipping Nanowrimo, because I thought I had outgrown it. Then I realized that what I’d outgrown was calling something a novel manuscript when I was just madly putting words on the page and dreaming up scenes that clearly didn’t fit a logical plot arc. I’m still going to embrace the freedom of writing a “shitty first draft,” but hopefully it’s going to be carefully planned and crafted enough that I don’t have to start completely from scratch when I revisit it in December or January. It’s going to be a balancing act, especially since I’m a natural pantser, but I’m giving it a try and using these last two weeks to figure out as much of my story as I can. I just started on my first ever character worksheet this morning. I know, more craziness.
Family and friends with more convenient travel schedules
Just kidding! I haven’t seen my family since we moved at the beginning of July, and I haven’t seen my friend Dave since he shipped out to Afghanistan a year ago, so OF COURSE I’m excited that they’re coming to see us. But it does mean I’ll be playing host twice in November, so I’ll have to schedule some odd writing times and maybe some marathon make-up days. (You know, like everyone else who has kids and a full-time job and way more responsibilities than I do. I'm not complaining, I promise.)
One thing I don't need now that I live in the Pacific Northwest: This website that makes soothing rain noises, mentioned by Stephanie Perkins. Haha, suckers! I have more natural rain noises than I know what to do with here...Oh, wait...
Are you doing Nanowrimo this year? What are you doing to get ready?
Posted by Jillian Schmidt at 8:17 PM