This made me sad today:
This helped me be less sad:
But obviously there are more serious things to be sad about, like the storms and flooding that tore through the areas of the east coast where the vast majority of my friends and family are, and which especially ravaged Kyle’s hometown where most of his family still lives.
And of course, the memories from ten years ago today.
I was a senior in high school when it happened. We caught the news in snatches as the day progressed; in some classes teachers turned on the television and everyone watched intently, gasps and worried whispers occasionally breaking the silence. Others didn’t have TVs or pretended that we could actually focus on academics, so we’d have to wait until the period was over and we could enter the frothing rumor mill in the halls. I didn’t know anyone living near the Twin Towers or the Pentagon at the time, but I watched the worried faces of students who did, not knowing what to say to them. Then we heard that a plane had gone down in our state too, and it all became more real and more surreal at the same time. Who knew what could happen next, and where?
Years later I visited the memorial for Flight 93, including a wall covered with mementos left by visitors. I held it together until I saw a few action figures among them, and thought of the little kids leaving their superheroes in the memory of human heroes. 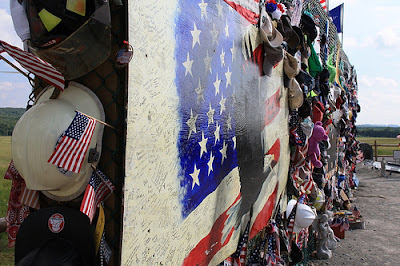 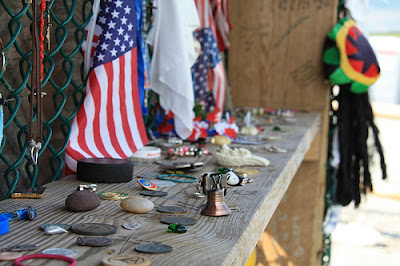 I remember gathering with friends the evening of 9/11, trying to make sense of everything and failing. The guys, including my boyfriend at the time, talked energetically about enlisting after graduation to fight the terrorists. I didn’t believe most of them would really do it, but it gave me something else to be worried about.
9/11 was a defining moment for me, yes – it subtly changed how I viewed America, life, relationships – but it was also a distant one compared to the experiences of people personally connected to the events. Yesterday, thanks to a link from Stephanie Perkins, I read Meg Cabot’s memories of being there, of fearing for her loved ones, of knowing people who died. It was so beyond what I went through at the time -- or what I've ever gone through, really -- and she expresses it so deeply and beautifully. Everyone should read it.


I also discovered today that MeetUp, the online social groups website that helped me meet some of my new friends here in Oregon, was a project born of 9/11 and the desire to continue the sense of community that came out of the disaster. From the email I received this morning:

When the towers fell, I found myself talking to more neighbors
in the days after 9/11 than ever before. People said hello to
neighbors (next-door and across the city) who they'd normally
ignore. People were looking after each other, helping each
other, and meeting up with each other. You know, being
neighborly.

A lot of people were thinking that maybe 9/11 could bring
people together in a lasting way. So the idea for Meetup was
born: Could we use the internet to get off the internet -- and
grow local communities?

We didn't know if it would work. Most people thought it was a
crazy idea -- especially because terrorism is designed to make
people distrust one another.

A small team came together, and we launched Meetup 9 months
after 9/11.


So here's to community, resilience, and valuing what we have, always.
Posted by Jillian Schmidt at 7:09 PM