(There’s a reason I’m talking about Borders so long after the news first broke, I promise.)
Like most people I was depressed to hear that Borders was closing. Yes, it’s a big chain store, but it was always my favorite of the chain stores. (A really great free membership program + computer search stations in the store + the general friendly feeling of a smaller business.) I dreamed about seeing my book on their shelves someday. And now I worry about what the closing will mean for the thousands of employees, the industry, all those giant empty storefronts… it’s depressing.
But let's be serious... just because I’m sad doesn’t mean I’m going to miss a book sale.
The first weekend of the closing sale, Kyle and I biked down to the nearest store. We were incredibly excited. (Okay, maybe I was excited and Kyle was worried about where we would find space for all of those books.) And look at everything I brought home: 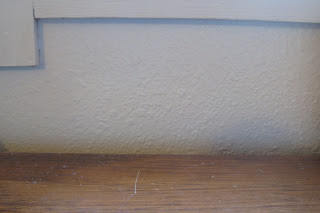 That’s right, nada. I found plenty of books that I wanted, but when I did a quick check on my phone I found that the Amazon prices were much cheaper. And I don’t mean a dollar or two difference; they were almost half as much. No wonder you are going out of business, Borders! Arrg.
When the prices were slashed again we went back, because I am a loyal customer and, as mentioned, completely unable to turn down a book sale. And look at the massive load of books I brought home this time: 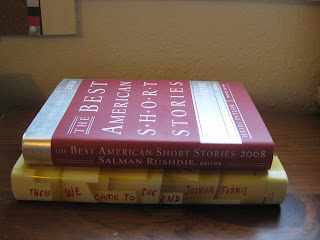 Sigh. Only two, and only because they were clearance.
BUT this week I found out that all of their books had been marked 40-60% off, which was where they needed to be to beat Amazon. So my long-suffering husband and I made a THIRD trip, and today I actually did bring home a stack of lovely literature: 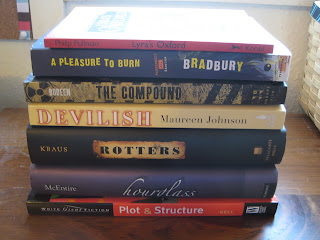 And Kyle bought a few travelogue and culture books that I'll probably read as well.
I feel so much better now that I can pretend that the previous trips were just scouting missions. Not that I usually gleefully celebrate my consumerism while I'm between jobs, but I can make an exception for books, right? I mean, even if I'm judging them by their covers they're awesome.
Ah, the creepy. 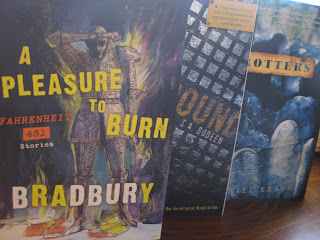 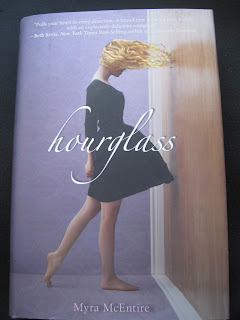 Ah, the additions to my already lengthy to-read list and my overstuffed shelves...
Anyone else taking advantage of the sales at Borders (or  just being depressed by them)?
Posted by Jillian Schmidt at 4:27 PM