R4W Follow-up: I Don't Really Care About Your Hair

I’m skipping, or perhaps skirting, today’s YA Highway RoadTrip Wednesday prompt, because “the best book I’ve read this month” is The Secret History, which I already blogged about. But I did promise to do a companion entry about effective physical character descriptions before I got distracted by villains and bears, so we can go with that.
Some people want to have a detailed vision of the characters’ appearances as they read and are upset if the author never describes them.
I am not one of those people.
I’m happy to read along with the vaguest sense of their looks unless there’s something important or highly unexpected that I need to know. (For example, if the protagonist is an albino midget with piercings, you should probably let me know that up front.)
In fact, I’m more likely to get annoyed by the presence of character descriptions where I don’t think they’re necessary. A few months ago I went out of my normal genres and picked up Longshot by Dick Francis on a whim, and I really enjoyed it – the narrative voice was amusing and the story was interesting even though I know nothing about horse racing. But something irked me about the opening chapters: Francis, or his narrator, felt the need to physically describe every single character almost as soon as they appeared. This crippled the pacing when large groups of people showed up all at once, and in some cases it made for some very awkward sentences:
“Tremayne was equally unimpressed. Tremayne, sixtyish, gray-haired, big and self-assured, was clearly not pleased at the interruption.”

“[I] was met outside the Reading bus station by a shivering young woman in a padded coat and woolen hat who visually checked me over from boots six feet up via ski suit to dark hair and came to the conclusion that I was, as she put it, the writer.”
But again, I’m biased against character description, and I understand that they’re sometimes wanted or even needed – you can’t just avoid all character descriptions altogether. Though looking at the poor, undescibed characters in many of my manuscripts, apparently I think that’s exactly what I can do. So where’s the middle ground?
While I’m certainly not an expert on writing character descriptions, I can at least point out three ways to please picky anti-character-description readers (in other words, me).
RULE ONE: Make me want the description ahead of time.
There’s a lot of character description in The Secret History, and not just short blurbs in the midst of the action but sometimes whole paragraphs. But here’s the thing… I actually like them. The first thing Tartt does right is make me anticipate and want those descriptions. For example, the narrator hears rumors about Professor Morrow and his students well before meeting them, and they accumulate to form an aura of mystery about the group.
“The degree of truth in any of this was, of course, unknowable but the more I heard about him, the more interested I became, and I began to watch for him and his little group of pupils around campus. Four boys and a girl, they were nothing so unusual at a distance. At close range, though, they were an arresting party – at least to me, who had never seen anything like them, and to whom they suggested a variety of picturesque and fictive qualities.”
And suddenly I want that close-up and I don’t mind sitting through a page and a half of character description. Tartt even sneaks in a second level of character description, because when the narrator finally has his first conversation with the group, he describes the particularities of their voices. Here the details are interwoven in the dialogue, and once again, they’re well done so that I don’t mind them. A big part of the secret is…
RULE TWO: Go beyond information I could get from a driver’s license. 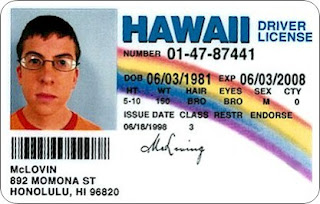 So your character is a six-foot tall blond with blue eyes. Great. Give me something unexpected, unique, humorous… something.
In TSH, we do learn about Henry's height (6 ft) and hair (dark). But we also learn that “he might have been handsome had his features been less set, or his eyes, behind the glasses, less expressionless and blank” and that he “walked stiffly…with the self-conscious formality of an old ballerina, surprising in one so large.” We meet Francis: “angular and elegant, he was precariously thin, with nervous hands and a shrewd albino face,” wearing “a black greatcoat that billowed behind him as he walked and made him look like a cross between a student prince and Jack the Ripper.” And so on. It’s all delightfully and appropriately bizarre.
RULE THREE: When in doubt and if it fits, make me laugh
This is kind of a general rule. TSH isn’t the kind of book that’s full of chuckles, but she still works in some gems: the narrator has a dormmate whose “voice was loud and rose frequently to a screech, which rang through the house like the cries of some terrifying tropical bird."
How do you feel about character description, and how do you write effective ones?
Posted by Jillian Schmidt at 11:59 PM

Email ThisBlogThis!Share to TwitterShare to FacebookShare to Pinterest
Labels: Reading for Writing, writing