What I will NOT miss about Frederick, Maryland

The traffic. Ohmygoodnessthetraffic. Also the drivers, though I’ve pretty much acclimated and will probably seem like a crazy aggressive driver to Oregonians.
My Epic War with Stinkbugs. No matter how many I sucked up and left on display in our vacuum cleaner, they never got the message. Though based on their habit of repeatedly flying into light fixtures (clink-clink-clink over and over and over for hours) I don’t think they’re a very bright species.
The awkward elements of our apartment, most of which come of it being a split up version of a house built in the 1800s (that part is kinda cool): narrow hallways and stairwell, tiny closets, ancient radiators that sound like a high volume and poorly tuned one-man band, and a bathroom configuration that makes me either hit my head or splash my feet whenever I wash my face. I also never want to live on the third floor or higher again.
The stifling heat and humidity. Oregon summers will be around 20 degrees cooler than Maryland ones, with almost no humidity. Awesome.
The snow, sort of. While it was really cool that one time that Snowpocalypse shut down the state for a week and people were skiing down the main street, on the whole I’m happy to be moving somewhere with fewer snow storms. I'm just going to have to get used to the rain. 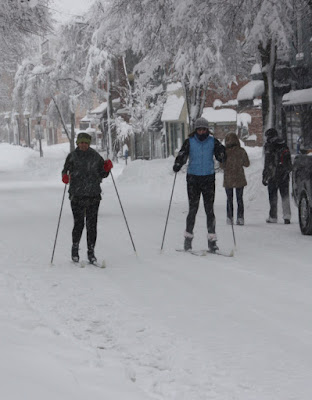 Feeling like I'm courting death every time I ride my bicycle on the local streets (because of the cars, not the bicycle gang.) Bring on bike-friendly Oregon!
I would add hipsters, but (1) I like some of what they create/support, like artsy events and coffee shops and urban biking (2) if I’m trying to avoid hipsters, Oregon is SO not the place to move.

I still refuse to wear skinny jeans though.
Posted by Jillian Schmidt at 10:00 PM