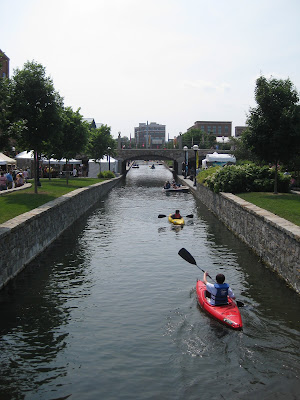 This weekend was Frederick’s Art Fest, an event that I really will miss when we move across the country to Oregon. It’s the weekend when Carroll Creek is cleared of algae and instead teems with kayakers and paddle-boaters, and all along its banks are tents of amazing art and groups of cavorting actors, dancers, and musicians.
There was a lot to see and reluctantly stop myself from buying today, but by far the most impressive creation was a full-size metal raptor crafted by Roland Metal Art. 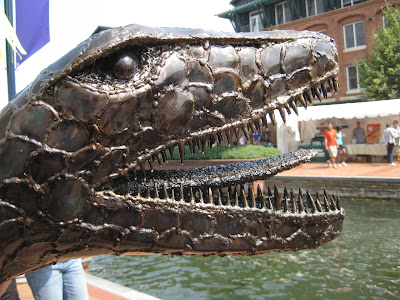 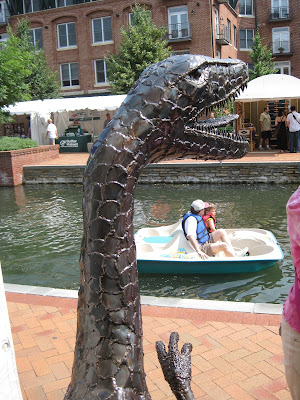 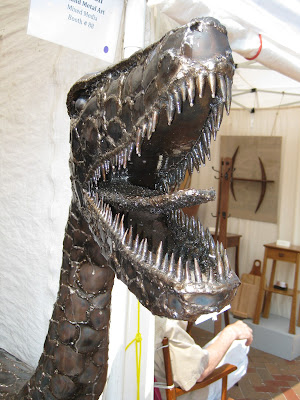 I couldn’t actually get a photo of its entire length because the tent was too crowded with people admiring an equally large Yoda and ET. The artists also make smaller (and more affordable) metal stick figures depicting various hobbies and careers, and I realized I had actually bought a bicycle themed piece from them a few years ago.
Also in attendance were some members of Twin Oaks, a community loosely based on Skinner’s utopian vision in Walden Two. I wanted to ask them about how closely they followed Skinner’s ideas, but instead I just admired their hammocks and moved on.
All in all, it was a pleasantly warm day full of friendly people and a good memory to add to my final weeks in Frederick.
At the end of my walk I grabbed lunch from Subway, and I was incredibly excited that they had avocados (or at least a green mush that seemed like avocados) for the first time ever… until I saw that they’d charged me extra for my tiny spoonful. I thought back to my last visit to Oregon and Northern California, where it seemed like every sandwich and salad came with fresh avocados at no extra charge.
See, I knew there was a reason I was leaving Frederick and moving out West after all…
Posted by Jillian Schmidt at 9:34 PM

Email ThisBlogThis!Share to TwitterShare to FacebookShare to Pinterest
Labels: moving