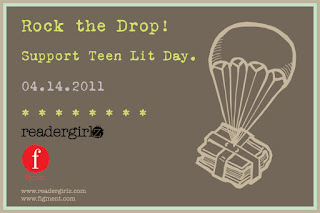 And in celebration, ReaderGirlz is sponsoring a Rock the Drop event in which publishers, authors, and plain old regular folks are encouraged to leave a YA book in a public place for a random reader to find.
Double neat!
Unfortunately I didn’t discover this event until around 7 PM tonight, but I decided I still had to participate. I dashed around my house looking for a book that I was willing to give up and finally remembered that I had bought an extra copy of Neverending Story for just such an occasion. Some people might consider Neverending Story too young to be strictly YA, but whatever, it’s awesome and for everyone and I needed to get going.
I printed out the explanatory book plate, ran to the local park, and decided to put the book on this statue thing: 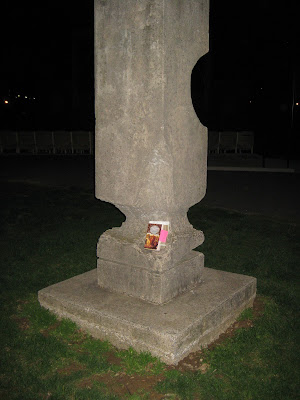 I moved it to the other side in view of the path, but I still started to feel silly. Yes, the park was still rather crowded, but it was already pretty dark and there was a good chance that no one would see my book. Just then, an adorable girl of just the right age rode by on her bike. She veered slightly off the path, taking her within feet of the book…
And she kept on riding.
Then she turned around, riding back towards the book…
And she still missed it.
Finally she rode practically straight at the statue…
But she was too distracted by the two ducks that she was chasing to notice anything else.
I thought about just walking up and handing it to her, but that would have been weird and kind of missed the point. So I headed back for dinner and told myself that she would eventually find it and be totally excited and forget all about the ducks.
But I'm an overly curious person, so I went back a little while ago when the park was deserted to find my book still sitting unclaimed on the statue.
Sigh.
I took it home with me to protect it from rain and dew, but I plan on dropping it again tomorrow. I'll just consider it Support Middle Grade Lit Day or Rock the Drop a Day Late.
If you missed the official Drop too, you should join me!
Posted by Jillian Schmidt at 7:52 PM