I was never very good at writing and listening to music at the same time. So far all of my stories have been accompanied only by the sounds of silence, or whatever music the coffee shop people force on me.
This means I don’t get to share YouTube videos of The Awesome Music That Inspired My Work the way other bloggers do.
Until now.
A few months ago I discovered Vampire Weekend on Pandora. The more I looked at the thumbnail of their album cover, the more I thought the girl on it looked like one of my MCs. Not wanting to ignore a possible sign from the universe, I eventually bought the CD. Yes, the actual physical CD. Antiquated, I know, but I wanted that cover photo in the flesh. I give you a rough approximation of my protagonist Helen, assuming that the popped collar was an accident. 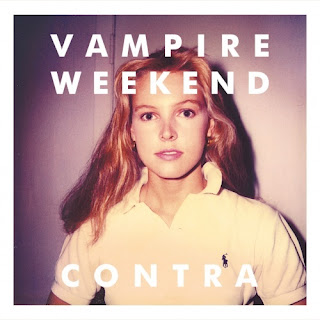 I even tried to listen to the CD while I wrote, but as usual it was too distracting. BUT I listened to it when I was idly brainstorming instead, and the song “Giving up the Gun” gave me the idea for a whole new character and scene.
And when I  looked for the music video online (just for YOU!), I discovered an incredible bonus sign from the universe. While the video wasn't what I was expecting, it focuses on a girl dominating at tennis, which is exactly what Helen does before I wrench her out of her normal world.
I’m definitely declaring it an inspirational music victory.
Enjoy (what may or may not be the only song I ever post here)!
Lyrics:
Your sword's grown old and rusty
Burnt beneath the rising sun
It's locked up like a trophy
Forgetting all the things it's done


My ears are blown to bits
From all the rifle hits
But still, I crave that sound
I heard you play guitar
Down at a seedy bar
Where skinheads used to fight

I see you shine in your way
Go on, go on, go on
Posted by Jillian Schmidt at 8:28 PM