Today I was unusually domestic. I did laundry, cleaned dishes, organized small sections of the house... And then I made a freaking pie.
You heard that right.
I have made exactly two pies in my life, and both of those were Oreo pudding pies. They are delicious and ridiculously easy. The recipe is on the Oreo pie crusts and basically involves stirring pudding and Cool Whip together.
But it was Pi day this week (March 14 = 3/14 = 3.14 = pi) and I have the week off and Kyle has been stressed out, so I decided it was time to step up my culinary game to celebrate. Unfortunately, I decided this about an hour before Kyle got home yesterday, and I really wanted to present him with a completed pie as a surprise. So I decided to make my pie one day after Pi Day. I found a promising peanut butter pie recipe here. It involved significantly more work than mixing three ingredients but didn't require me to bake anything or construct one of those criss-cross crusts from scratch. I bought my ingredients and hid the suspicious ones in my office and in a Capri Sun box in the fridge. 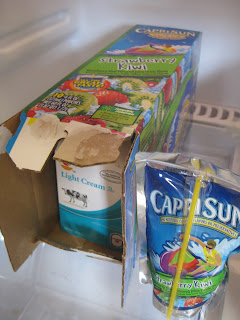 Do I have a six-year-old who loves Capri Sun fruit punch pouches? Um, no, that would be me.
The recipe was for two pies, but that seemed a little excessive and I didn’t want to put all of my eggs peanut butter in one basket pie crust. So in true Pi Day spirit I had to do some extra math, which was easy until I was trying to guesstimate one eighth of a giant container of Cool Whip. But it all worked out, and I did my measuring and mixing and heating and stirring. I figured it was a good sign when a squirrel was staring at my peanut buttery creation through the screen door. 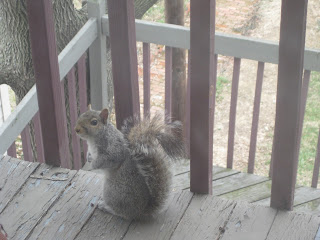 Soon enough, I had a completed pie. I was really happy with it, even though all of my culinary and craft projects end up looking like something a child could make. Maybe it’s the Capri Sun. 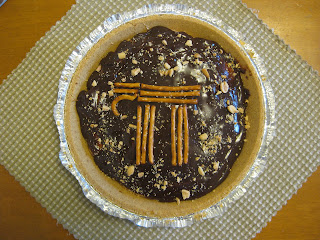 Kyle loved it too, and insisted on eating some before dinner and his bike ride, which I figure is a victory.
Happy Pi + .01 Day!
Posted by Jillian Schmidt at 6:23 PM