Magic on the Walls

Today I discovered (via my husband via Reddit) two amazing Calvin and Hobbes murals, originally posted by Flickr user HowBrownMetBlue. 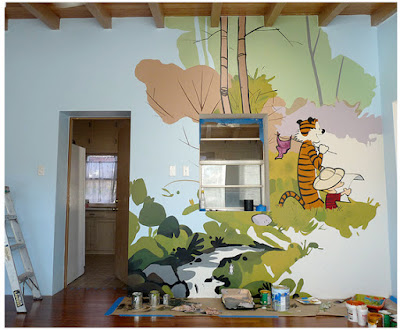 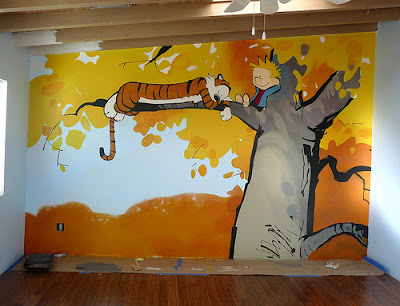 Clearly we need to have something equally amazing for our hypothetical children, even though we'll have to hire someone to paint it. Unless, of course, the theme of the mural is “a land full of two-dimensional palm trees, raptors, penguins, and stick-figure people,” which would fit our artistic talents nicely.
And while we’re hiring a muralist (which is, to my surprise, apparently a real word), he or she might as well paint my office, right? I mean, just imagine how amazing it would be to write stories in the midst of a fantastical forest teeming with strange and wonderful creatures. I would say I’m sketching out exciting ideas already, but, well, you know…
What would grace the walls of your ideal writer’s retreat?
Posted by Jillian Schmidt at 4:46 PM No comments:

We never did get to go on that hike – the weather stayed foul – so I turned my camera nearby instead. Our neighbor used to fly his Tibetan prayer flags until some of his military buddies ragged on him too much for having them instead of a giant American flag. Now they’re flying again, well-worn by time and the wind. 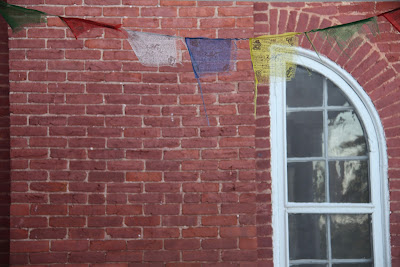 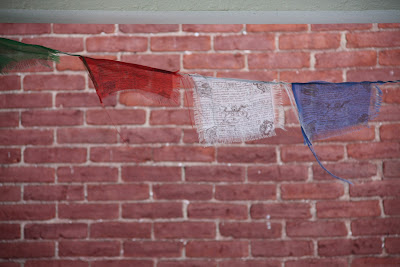 Also, sorry that Friday Photos + my failure to blog on weekdays have somehow turned my writing blog into a (mediocre) photo blog instead. I’ll try to work on that.
Posted by Jillian Schmidt at 6:21 PM No comments:

I fail at Photo Friday, and not just because I'm posting after midnight and therefore technically on Saturday. The only photograph I took this week was a boring and poorly lit shot of food. Sorry. But we’re planning to enjoy the outdoors this weekend if the gale force winds ever let up, so hopefully I will have better options for next Friday.
I do have something photographic to share in the meantime, however. Kiersten White, the writer whose amazing blog got me into this whole YA-writer-blogosphere in the first place, just unveiled the cover for her next book. Enjoy the awesomeness below and on her blog. 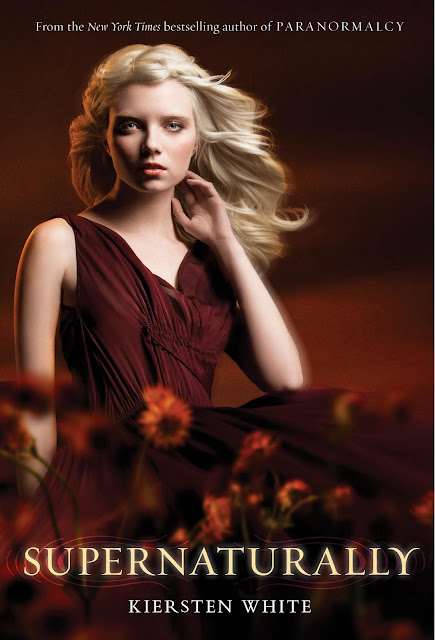 Posted by Jillian Schmidt at 10:10 PM No comments:

It’s Valentine’s Day, and I have an important quandary.
Why, when I’ve been blessed by a wonderful romantic relationship that has defined my life and made me happy every day for the past seven years, do I not really like to read or write about romance?
Many of my favorite YA bloggers talk about their love of writing flirting scenes and kissing scenes and will-they-ever-get-together scenes. But I have a confession to make: I’ve never written a kissing scene. Ever. I’ve written some flirting, but my characters and I are all rather skeptical about whether it’s going anywhere.
I LOVE kissing and flirting and love in real life, I promise. It’s just never on the top of my list when it comes to literature. Take my experience with Hunger Games. After finishing it, I was wandering around Goodreads and other sites to see what people thought about it, and I was honestly SUPER CONFUSED that so many people were obsessed with Team Gale vs. Team Peeta. I had noticed the love triangle, of course, but I just…didn’t really care. They were both good options and Katniss would figure it out eventually. I was much more interested in how all the politics and competition and violence would turn out.
I would say “to each his own” and not worry about it, but I want to write YA, and I realize that most YA readers, especially the female ones, want some romance, apparently the more complicated and competitive and fraught the better. So I need to learn to love those love triangles, appreciate angst, and write romance.
Maybe I should consult a few of the romantic plays and films that I actually enjoy.
Much Ado About Nothing
But I only like the head-butting, sharp-tongued reluctant romance between Beatrice and Benedict. I don't care for the Hero and Claudio story and actually have really serious problems with the fact that the behavior of Claudio and Leonato suddenly becomes okay at the end. Let's move on.
When Harry Met Sally
Basically Beatrice and Benedict with pecan pie.
Apparently I should follow a haters-become-lovers storyline, but I guess with younger models if I’m going to write YA.
The Princess Bride
Getting warmer, since I do get caught up in their romance in the beginning and the end. Though the middle is a lot of Buttercup being bewildered and ineffectively willful while Cary Elwes is dashing and the rest are freaking hilarious. Overall, I'm with the little boy who prefers sword-fighting.
Moulin Rouge
But let’s be serious, tragic love only appeals to me if it is sung by Ewan McGregor.
(At this point in the entry I ran out of ideas and went to scan the shelves for more examples. It took me a while to find something even close to romance, and it was A Knight’s Tale... which I adore except for the romance story line, since I’m way too competitive to appreciate someone “proving” their love by losing.)
This exercise is not going very well.
I also wanted to include books in this discussion, by the way, but the only example I could find on my shelves that had a semi-central romance that didn’t end horribly was Kiersten White’s Paranormalcy (she's one of those awesome kissing-scene-loving bloggers I mentioned earlier). I've decided it will become my official YA romance training manual. That's progress, right?
Here’s to love...and to the hope that you’re having better romantic luck than my characters.
Posted by Jillian Schmidt at 5:26 PM No comments: