This post is completely unrelated to writing. I just can’t help myself. I need to do a virtual happy dance about Leopard-Trek: 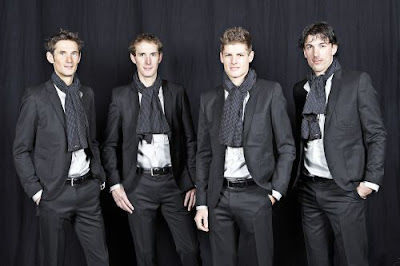 www.automobilsport.com
Who are those thin, handsome, scarf-wearing, European men? A new band that only the hippest hipsters have heard of?
Not quite.
Usually they look more like this: 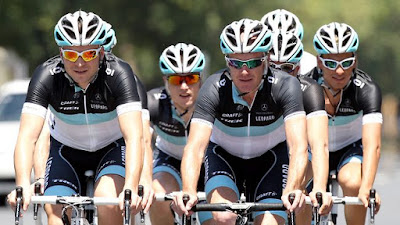 Adelaidenow.com
Leopard-Trek is the recently formed cycling team led by the Schleck brothers. Even if you aren’t a cycling fan, you may have heard of Andy Schleck, who finished second in the Tour de France this year. (We’re not going to talk about why he didn’t win right now because this is a happy post.) His brother Frank was injured early in the race, but trust me – he’s just as awesome. They've been my favorite cyclists for the past few years, so I would root for their team even if they were the only members and rode unicycles, but it gets better.
Also on the team is Jens Voigt, who earned my respect a million times over this year for being an incredible breakaway artist, workhorse, and team player. His talent and willpower and sacrifice are incredible. Oh, and don’t forget Fabian Cancellera, who’s been the world time trial champion four times and is the current Olympic gold medalist. So much likable and incredible cycling talent is on this team, I can barely handle it.
And even though I sadly don’t know much about the rest of the team members yet, I already like them as a group. They introduced themselves as “a team with soul” that wants to return cycling to a much better, fan-friendly, scandal-free place. Yeah, it’s PR, but the Schlecks and Voigt have earned their honest and fan-friendly reputation, and I really do believe in them.
I’ve never bought a team cycling jersey before (and a good thing too, since my least favorite cyclist took over the Schlecks’ old team) but I may need to ask for this one for my birthday. <hint hint> 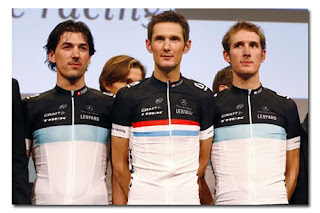 Gerry'sDailyRide.blogspot.com
And now, if you'll excuse me, I need to look at more team photos and celebrate like some strange combination of a pumped up sports fan who just found out about a sweet draft pick and a squealing fangirl about to meet her favorite band.

Posted by Jillian Schmidt at 8:58 PM

Email ThisBlogThis!Share to TwitterShare to FacebookShare to Pinterest
Labels: cycling